Andi Zeisler & Aya De Leon: We Were Feminists Once 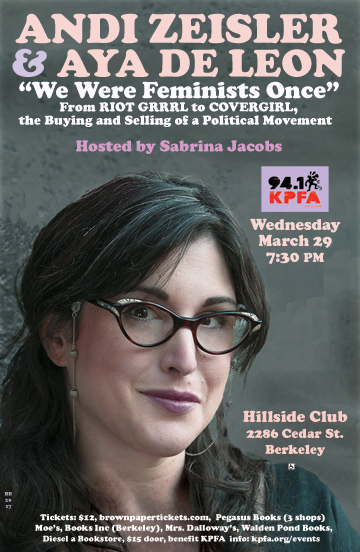 *Pegasus Books is the onsite bookseller*

The founder and creative director of Bitch magazine argues that pop culture has co-opted the feminist movement and transformed it into something unrecognizable and dysfunctional. While we’ve been watching and forwarding Amy Schumer’s videos, Republicans have twice voted against an act to close the gendered wage gap, the U.S.
remains one of only two world nations to not offer paid maternity leave, and access to abortion clinics is rapidly growing more difficult.

This increasingly looks not like a world that has finally emerged into a fully realized feminism, but like a world in which glossy, flirty feminism with you-go-girl tweets and Instagram photos has reduced feminism from a collective goal to a consumer brand.

Defining “feminist” as ‘a woman who lives the life she chooses’ is great if you’re a woman who already has choices. It does nothing whatsoever for the millions of women far from the campus, waiting in vain for empowerment .

“This is a razor sharp new book.” —The Guardian

“Nuanced, smart, and funny.” — In These Times

Aya De Leon is a poet, academic, activist, slam-poetry champ and Harvard graduate. She sees herself as bridging cultural communities, and brings a background in spoken word and hip-hop to her job as a UC Berkeley African American studies professor and coordinator of a campus-to-community partnership called Poetry for the People.

Sabrina Jacobs is the host and producer of A Rude Awakening, a cultural and political affairs show aired weekly on KPFA.

We Were Feminists Once: From Riot Grrrl to CoverGirl®, the Buying and Selling of a Political Movement (Paperback)