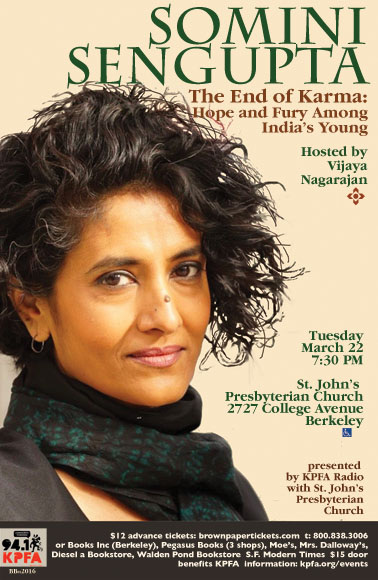 “The End of Karma is the essential beginning for any reader who wants to under- stand the future of the world’s biggest democracy. With meticulously researched, grippingly told stories about youth in today’s India, Sengupta’s quest to understand her daughter’s birthplace seized me like no other book coming from that country today.”– Suketu Mehta, author of Maximum City: Bombay Lost and Found

Somini Sengupta emigrated from Calcutta as a child in 1975 and grew up in California. Returning thirty years later to India as the first Indian-American bureau chief for The New York Times, she found a vastly different country: one defined as much by aspiration—at least by its illusion—as by the strictures of sea and caste. The End of Karma explores this new India through the eyes of young people from different worlds: a Maoist rebel; a woman killed because she married the “wrong” man; a teenage girl who needles her father to let her become a police officer. Driven by aspiration, thwarted by state and society, the young are making new demands on India’s democracy for equality of opportunity, dignity for girls, and civil liberties. Sengupta dramatically spotlights these stories of ordinary men and women, weaving together a groundbreaking portrait of a land – one of the planet’s largest – in turmoil.