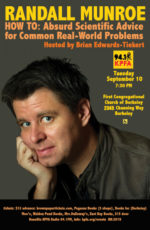 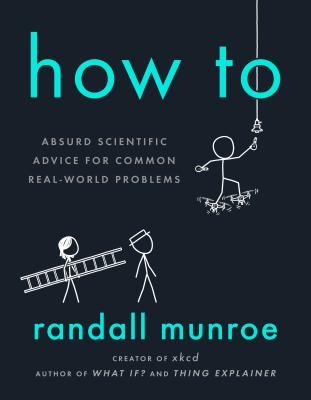 Randall Patrick Munroe is an American cartoonist, author, scientific theorist, and creator of the webcomic xkcd – primarily a stick figure comic with themes in computer science, technology, mathematics, science, philosophy, language, pop culture, romance, and physics. The popularity of xkcdamong science fiction fans resulted in Munroe being nominated for a Hugo Award for Best Fan Artist in 2011 and 2012. In 2014 he won the Hugo Award for Best Graphic Story. In 2014 Munroe published a book entitled What If?: Serious Scientific Answers to Absurd Hypothetical Questions. His book published in 2015, Thing Explainer, explains concepts using only the thousand most common English words.

How To: Absurd Scientific Advice for Common Real-World Problems contains entirely original, never-before-seen material and is chock full of deeply researched, entertaining, and often alarming scientific thought experiments. It is perhaps the world’s most amusing and useless self-help guide.

“Munroe’s blog What If specializes in cunning answers to, as The Atlantic put it, the kinds of wonderful and fanciful hypotheticals that might arise when the nerdily inclined get together in bars and ask things like “How fast can you hit a speed bump while driving and live?”

Hosted by Brian Edwards-Tiekert, who is the founder and popular co-host of UpFront, the morning drive-time public affairs program on KPFA Radio. He started his work in media helping to set up the Independent Media Center in Chiapas, Mexico, where he also did human rights work. For two years, he ran a nationwide support program for progressive publications at colleges and universities. He started at KPFA as a beat reporter covering environmental justice issues, during which time he served as a network correspondent during international climate negotiations, produced live national broadcasts covering elections and political conventions, and established a journalism training program inside KPFA. In 2016, he was awarded a John S. Knight Journalism Fellowship at Stanford University.

How To: Absurd Scientific Advice for Common Real-World Problems (Hardcover)