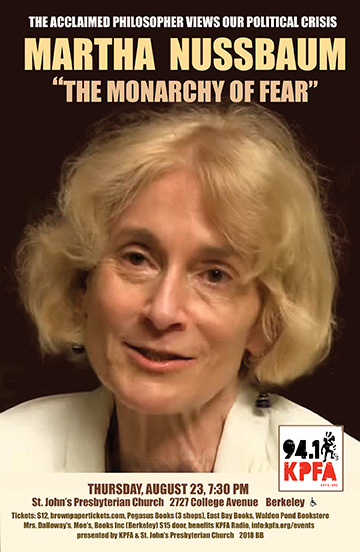 “One of the world’s most honored philosophers provides a candid examination of the current political crisis.”

For decades Martha C. Nussbaum has been an acclaimed scholar and humanist, earning dozens of honors for her books and essays. In The Monarchy of Fear she turns her full attention to the terrible political standoff tha has polarized America since the Trump election. Although today’s atmosphere is heavily marked by partisanship, divisive rhetoric, and the seeming total inability of two halves of the country to communicate with one another, Nussbaum focuses on what so many pollsters, journalists and pundits have overlooked.  She sees a simple truth at the heart of the problem: the political is always emotional.  Globalizatiojn, automation and the high costs of high education have produced feelings of utter powerlessness in millions of people in the U.S.Similar issues trouble European unity.

That sense of powerlessness and a pervasive underlying fear bubble into resentment and blame: blame of immigrants, blame of Muslims, blame of other races, blame of cultural elites.  While this politics of blame played a hefty role in the elction of Trump – and the vote for Brexit, Nussbaum argues that it can in fact be found on all sides of the political spectrum—confusingly intertwined, however, with reasonable arguments aiming at greater justice. She insists that retribution is always a bad response to fear, and she articulates a clear politics of constructive work and hope.

“Nussbaum is an elegant and lyrical writer, and she movingly describes the pain of recognizing1 one’s vulnerability.” — THE NEW YORKER

“Like any clearheaded thinker, Nussbaum was unsettled by Trump’s election, but she’s also troubled by the way people of all political persuasions have succombed to fear and mindless fear-slinging. She tries to keep Trump at arm’s length and focus instead on what philosophers and psychologists going back to antiquity have had to say about fear…its role in stoking anger, disgust, and envy, and how those emotions in turn perpetuate divisive politics (sexism and misogyny especially)”  —Kirkus Reviews

Martha C. Nussbaum is the Ernst Freund Distinguished Service Professor of Law and Ethics, appointed in the Philosophy Department  and the Law School of the University of Chicago. She gave the 2016 Jefferson Lecture for the National Endowment for the Humanities and won the 2016 Kyoto Prize in Arts and Philosophy. She has written more than twenty books.