In this special October Magic edition, Lyrics & Dirges presents Ariel Gore (Hexing the Patriarchy) in conversation with Michelle Ruiz Keil (All of Us with Wings). Moderated by MK Chavez. 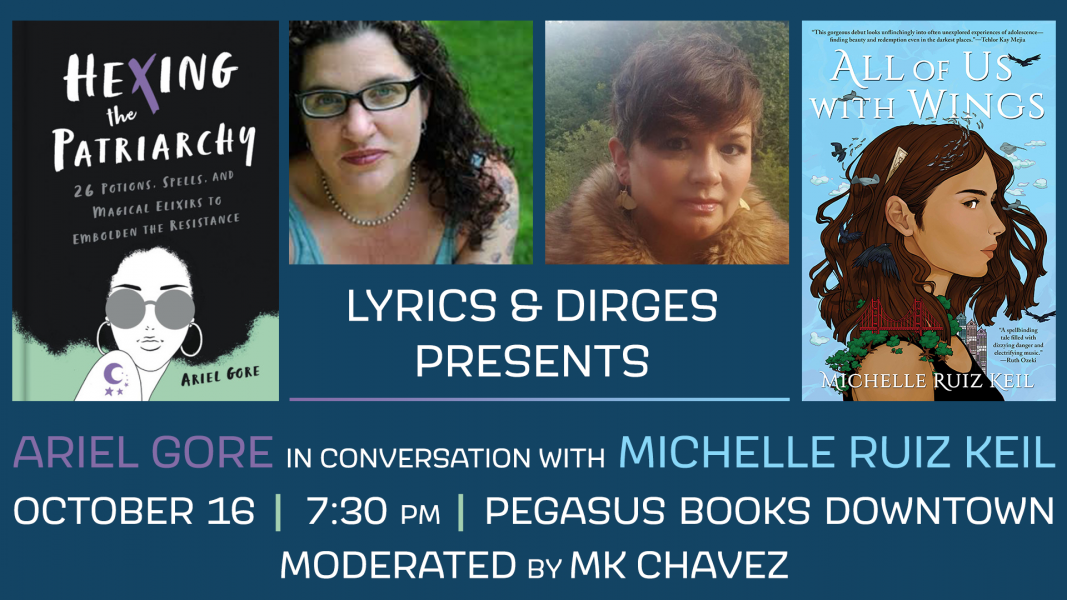 A magical guide to subverting manboy power, one spell at a time

Skeptics might think witchcraft is nothing more than a fad, but make no mistake: modern witches aren’t playing around. Today’s wizarding women are raising hell, exorcising haters, and revving up to fight fire with a fierce inferno of magical outrage.

Magic has always been a weapon of the disenfranchised, and in Hexing the Patriarchy, author Ariel Gore offers a playbook for the feminist uprising. Full of incantations, enchantments, rituals, and witchy wisdom designed protect women and bring down The Man, readers will learn how to . . .

From summoning Ancestors to leveraging the Zodiac, these twenty-six alphabetically inspired spells are ready-made recipes for toppling the patriarchy with a dangerously divine, they-never-saw-it-coming power.

Ariel Gore is a journalist, writer, and teacher. Her novel We Were Witches was celebrated for its “piercing and wise” (Booklist) examination of modern womanhood. Gore is the founder of Hip Mama, an Alternative Press Award-winning publication covering the culture and politics of motherhood, and the creator of the Fascism Fatigue Coloring Book. She lives in Santa Fe, New Mexico.

ALL OF US WITH WINGS

Seventeen-year-old Xochi is alone in San Francisco, running from her painful past: the mother who abandoned her, the man who betrayed her. Then one day, she meets Pallas, a precocious twelve-year-old who lives with her rockstar family in one of the city’s storybook Victorians. Xochi accepts a position as Pallas’s live-in governess and quickly finds her place in their household, which is relaxed and happy despite the band’s larger-than-life fame.

But on the night of the Vernal Equinox, as a concert afterparty rages in the house below, Xochi and Pallas accidentally summon a pair of ancient creatures devoted to avenging the wrongs of Xochi’s adolescence. She would do anything to preserve her new life, but with the creatures determined to exact vengeance on those who’ve hurt her, no one is safe—not the family she’s chosen, nor the one she left behind.

Michelle Ruiz Keil is a Latinx novelist and playwright with an eye for the enchanted and a way with animals. She teaches writing with a focus on fairytale, divination, and archetype and curates All Kinds of Fur: A Fairytale Reading Series and Salon in Portland, Oregon. She has been a fellow at the Squaw Valley Community of Writers and Lit Camp. Her published short fiction can be found on Cosmonauts Avenue, and she has a forthcoming theater piece in collaboration with Shaking the Tree Theater. All of Us with Wings is her first novel.

Every third Wednesday of the month at Pegasus Books Downtown

Hexing the Patriarchy: 26 Potions, Spells, and Magical Elixirs to Embolden the Resistance (Hardcover)

All of Us with Wings (Hardcover)