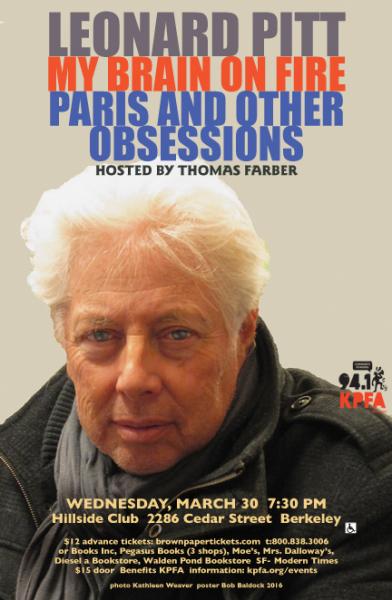 My Brain On Fire is Leonard Pitt’s story of growing up as a total misfit in Detroit in the 1940s and 50s. In a later age he would have been put on Ritalin and paraded before psychiatrists because he couldn’t pay attention in school. In 1962, at the end of a misguided foray towards a career in advertising, he took the ultimate cure – a trip to Paris. There in the City of Light, Leonard’s mind exploded. And it hasn’t stopped since.

Leonard Pitt grew up in Detroit always “feeling…out of place.” A poor student, he did not begin to find himself until high school when it became clear that his strengths lay in art and design. It was then he began dreaming of Paris, and of the grand bohemian life he could live there. After dropping out of art school and working briefly for an ad agency, he…followed his ambition to go to Paris and study mime with the legendary Etienne Decroux (the teacher of Marcel marceau). Pitt stayed froi seven years, During that time he lived in a garret, sold newspapers, and fell in and out of love, all while learning to see bodily movement in intriguing new ways. Decroux’s method stressed connectedness to the ground, yet other forms of movement, such as ballet, emphasized a separation from the earth. Pitt’s training allowed him to understand people in terms of their physical presence and, in particular, the light he saw “emanating from their bodies.”..

What makes Pitt’s book so enjoyable is not only following the intellectual leaps he makes between his many and varied topics of interest. It is also seeing the creative connections among apparently unrelated subjects…From start to finish, Pitt’s memoir is a lively autodidactic romp through a life well-lived in both mind and body.”