The opening talk and book signing by Richard Schwartz about his new book The Man Who Lit Lady Liberty, The Extraordinary Rise and Fall of Actor M. B. Curtis. The talk will cover M. B. Curtis and his mind-boggling exploits in Berkeley in the 1880s and 90s and what indelible marks are left of his presence. 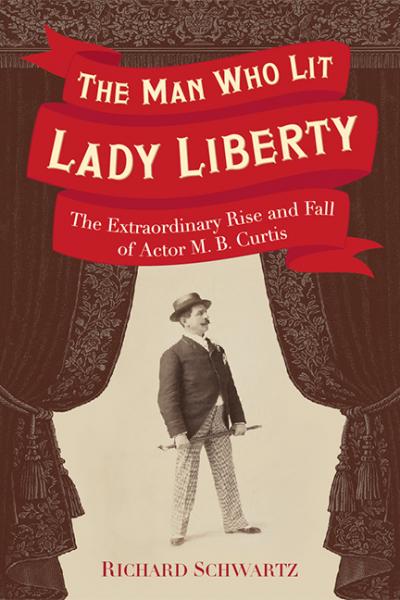 As the Statue of Liberty stood unlit and unloved by American politicians in 1886, one of her saviors was creating a theatrical sensation at New York's Fourteenth Street Theatre. Actor M.B. Curtis, who had achieved overnight success in Sam'l of Posen, a groundbreaking play that transcended the common stereotypes of Jewish characters current at the time, was basking in public accolades at every curtain call when he came to Lady Liberty's aid. Curtis's rise to the top of his profession and his resulting fall from grace is a dramatic arc that rivals anything created for the stage. Actor, producer, real estate developer, promoter, hotelier, benefactor, and murder suspect, M. B. Curtis's life encompassed the highs of celebrity and fame as well as the lows of failure, illness, and a faltering career. The Man Who Lit Lady Liberty rescues M. B. Curtis's story from the dusty archives of forgotten history and reexamines an actor whose creativity and cultural influence still resonate today.

Richard Schwartz is a historian and the author of Eccentrics, Heroes, and Cutthroats of Old Berkeley; Earthquake Exodus, 1906; Berkeley 1900; and The Circle of Stones. Originally from Philadelphia, Pennsylvania, he graduated from Temple University with a bachelor’s degree in English Literature. An outdoor enthusiast and animal lover, Schwartz worked on a Pennsylvania Dutch farm for two years before heading west to find higher mountains. He now lives in Berkeley, California, where he works as a building contractor and documents early Native American sites in the Bay Area. The Man Who Lit Lady Liberty (April 2017) is his fifth book.