Book Launch Party with Barbara Dane and Friends, at Freight and Salvage 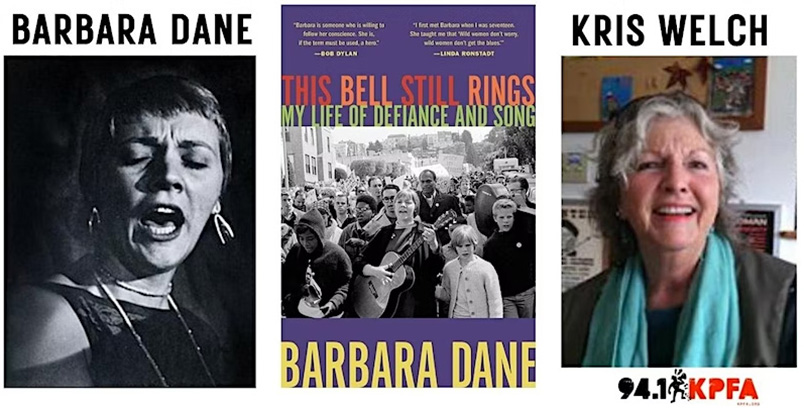 Please join KPFA Radio at The Freight & Salvage on Monday, October 17th at 7:00pm when we welcome the legendary Barbara Dane and friends in celebration of the release of Barbara’s autobiography, This Bell Still Rings: My Life of Defiance and Song. This live, in-person event will be hosted by KPFA’s Kris Welch and will include special guests such as: Tammy Hall, Holly Near, Maureen Gosling, Avotcja, Mark Hummel and Pablo Menedez. Pegasus Books will be the bookseller at this event.

PURCHASE TICKETS (does not include book)

ABOUT THE BOOK:
The autobiography of a courageous singer-songwriter, activist, and American icon. A renowned folk, blues, and jazz singer who performed with some of the twentieth century’s most celebrated musicians, from Louis Armstrong to Bob Dylan. A proud progressive who has tirelessly championed racial equality and economic justice in America, and who has traveled the world to sing out against war and tyranny. An organizer, a venue owner, a record label founder, and a woman who has charted her own creative and political path for more than ninety years. Barbara Dane has led an epic, trailblazing life in music and activism, and This Bell Still Rings tells her story in her own adventurous voice. Dane’s memoir charts her trajectory from singing in union halls and at factory gates in World War II–era Detroit, to her rise as a respected blues and jazz singer, to her prominence as a folk musician frequently performing at and participating in civil rights and peace demonstrations across the US and abroad—from post-revolutionary Cuba to wartime Vietnam. This Bell Still Rings illuminates “one of the true unsung heroes of American music” (Boston Globe), and it offers a wealth of inspiration for artists, activists, and anyone seeking a life defined by courage and integrity.

ABOUT THE PARTICIPANTS:
Barbara Dane is an American folk, blues, and jazz singer, guitarist, record producer, political activist and co-founder of Paredon Records with Irwin Silber. "Bessie Smith in stereo," wrote jazz critic Leonard Feather in the late 1950s. Time wrote of Dane: "The voice is pure, rich ... rare as a 20-carat diamond" and quoted Louis Armstrong's exclamation upon hearing her at the Pasadena jazz festival: "Did you get that chick? She's a gasser!" On the occasion of her Barbara’s 85th birthday, The Boston Globe music critic James Reed called her "one of the true unsung heroes of American music."

Kris Welch is celebrating 50 years with KPFA Radio and is currently the host of The Talkies, a place for the cultural, the intellectual, the political, the spiritual — and the silly. Life as we know it, fear it, love it, question it and live it.