Susan Faludi: In The Darkroom

*Pegasus Books is the onsite bookseller* 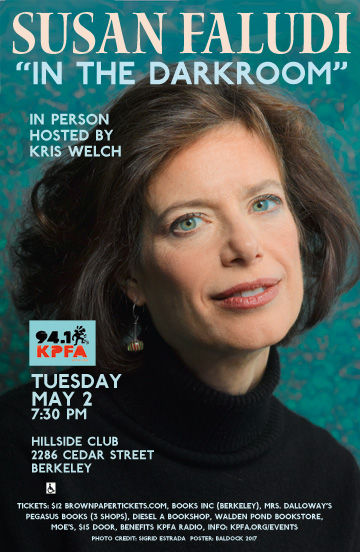 In this riveting book about a very complicated subject, Ms. Faludi… does a remarkable job tracking down the truth about her father, a person of multiple and contradictory  identities…Ms. Faludi unfolds her father’s story like the plot of a detective novel.
—The Wall Street Journal

About In the Darkroom:

“In the summer of 2004 I set out to investigate someone I scarcely knew, my father. The project began with a grievance, the grievance of a daughter whose parent had absconded from her life. I was in pursuit of a scofflaw, an artful dodger who had skipped out on so many things—obligation, affection, culpability, contrition.  I was preparing an indictment, amassing discovery for a trial. But somewhere along the line, the prosecutor became a witness.”

So begins Susan Faludi’s extraordinary inquiry into the meaning of identity in the modern world and in her own jaunted family saga. When the feminist writer learned that her seventy-six  year-old father –long estranged and living in Hungary—had undergone sex reassignment surgery, that investigation would turn personal and urgent . How was this new parent who claimed to be “a complete woman now” connected to the silent, explosive, and ultimately violent father she had known, the photographer who’s built his career on the alteration of images?

Faludi chases that mystery into the recesses of her suburban childhood and her father’s many previous incarnations: American dad, Alpine mountaineer, swashbuckling adventurer in the Amazon outback, Jewish fugitive in Holocaust Budapest. When the author travels to Hungary to reunite with her father, she drops into a labyrinth of dark histories and dangerous politics in a country hell-bent on repressing its past and constructing a fanciful—and virulent—nationhood…

Susan Faludi is the author of Stiffed: The Betrayal of the American Man, and Backlash: The Undeclared War Against American Women, winner of the National Book Critics; Circle Award for Nonfiction. Her work has appeared in The New Yorker, the Wall Street Journal, The New York Times, the Los Angeles Times, and The Nation. She lives in San Francisco.

Kris Welch is a veteran, very popular KPFA on-air host, a mother, and a grandmother.

In the Darkroom (Paperback)