This Recurring Event is at Pegasus Books on Solano 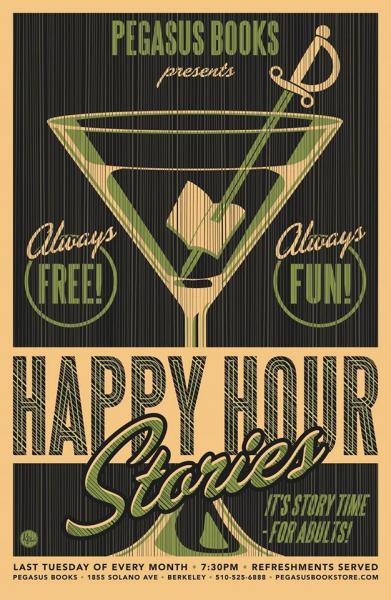 Join us for a special evening of stories, hosted and curated by Vernon Keeve III (Director of the Association of Black and Brown Writers).

Vernon Keeve III left his craggily cradle in the South, but it follows him in shadow. He constantly compares his new surroundings to that historic space and has noticed the ways in which the entirety of America is a bastard from Virginia—the state of his origin. He has been published in Ishmael Reed’s Konch magazine, received the Zora Neale Hurston Award from Naropa University, was a featured reader at the SF Jazz Poetry Festival of 2014, and is a contributing writer to Black Girl Dangerous. He earned his M.F.A. from the California College of the Arts and a M.A. in teaching from Bard College. He is always writing and teaches at the College of Alameda. He is working on his first chapbook, Conversations with a Southern Migrant, slated to be published by Nomadic Press.

DeShara Suggs-Joe is a MFA Candidate at California College of the Arts where she studies Writing. She got a B.A at Columbia College Chicago in Marketing Communications. She made a transition into poetry in 2013 by way of a Cave Canem workshop in Brooklyn.  She has two poetry videos forthcoming, and she is currently compiling #butimcrazy posts found on her Instagram set to be released next year. She likes to write about social issues with a special interest on black woman, and her new home of Oakland.

Jezebel Delilah X is a queer, lush-bodied, Black, femme performance artist, writer, actress, filmmaker, educator, facilitator, orator and Faerie Princess Mermaid Gangsta for The Revolution. She loves to flirt, laugh, perform, crack corny jokes, and insert Octavia Butler references into every conversation. She is a Co-Managing Editor for Everyday Feminism; co-host of the queer/feminist Open Mic, Culture Fuck; Creative Director of queer, Black, multi-disciplinary performance troupe, Congregation of Liberation; and one of the founding members of Deviant Type Press. She has performed in a wide variety of Queer and Queer People Of Color theatre projects and cabarets, and has been a featured reader at literary events all over the Bay Area. She uses a combination of memoir, poetry, theatre, and feminist storytelling to advance her politix of radical love, socioeconomic justice, anti-racism, community accountability, critical reflection, love, healing, and liberation. She loves romantic songs, romantic films, romantic books, romantic conversations, romantic friendships, and writing long, vulnerable, passionate facebook statuses about romance.

Robert M.E. is a poet and erotica author from Detroit, MI. Robert's explicit yet poetic style echoes from his influences Donald Goines and Samuel R. Delany. Soon, he will be releasing a collection of sex tales, "Nasty Good".

Directed by Vernon Keeve III, the Association of Black and Brown Writers (ABBW) aims for equitable distribution and representation of black and brown voices across the East Bay lit scene. ABBW aims for diverse programming both within the Nomadic Press Oakland Workspace, as well as between community partners and within well-established venues across the East Bay.

Created in 2014 by Pegasus on Solano's Elizabeth Freeman and Manuela Aronofsky, Happy Hour Stories is a special story time - for adults!

Every last Tuesday of the month, short stories on a theme are read aloud by Pegasus employees and friends.... Served up with a refreshing drink, and light snacks.