Virtual Book Launch for Freedom! The Story of the Black Panther Party, with authors Jetta Martin and Waldo Martin Jr.

WATCH RECORDING OF THIS EVENT 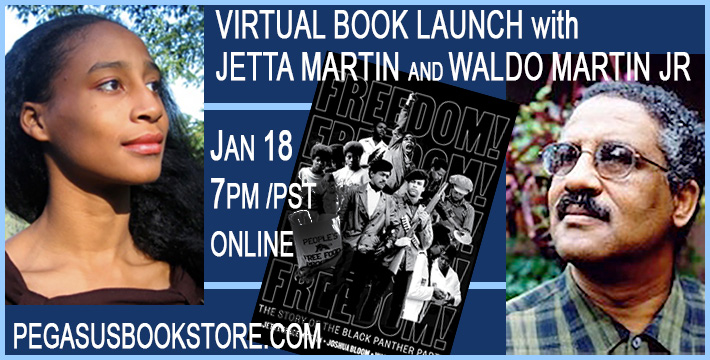 Jetta Martin and Waldo Martin Jr. discuss their new book for Young Adult readers, FREEDOM! THE STORY OF THE BLACK PANTHER PARTY, published by Levine Querido. This event will take place on Zoom. The event is free to attend, however registration is required.

ABOUT THE BOOK:
This is the story of Huey and Bobby. Eldridge and Kathleen. Elaine and Fred and Ericka. The committed party members. Their supporters and allies. The Free Breakfast Program and the Ten Point Program. It's about Black nationalism, Black radicalism, about Black people in America. From the authors of the acclaimed book, Black Against Empire: The History and Politics of the Black Panther Party, and introducing new talent Jetta Grace Martin, comes the story of the Panthers for younger readers—meticulously researched, thrillingly told, and filled with incredible photographs throughout. Freedom! The Story of the Black Panther Party.

ABOUT THE AUTHORS:
Jetta Grace Martin is a debut author from the San Francisco Bay Area. She earned her A.B. in Social Studies and African American Studies from Harvard University. Jetta is also a dancer, performer and choreographer who has performed nationally and internationally, and whose choreography has been presented by the Museum of the African Diaspora and the Black Choreographer's Festival. Jetta is the recipient of the Cornel West Prize and the Kathryn Ann Huggins Prize, for her research on race, embodiment, and Katherine Dunham.

Waldo E. Martin Jr. is the Alexander F. and May T. Morrison Professor of American History and Citizenship at the University of California, Berkeley. He is the author of No Coward Soldiers: Black Cultural Politics in Postwar America (2005), as well as other books, and the co-author of Black Against Empire: The History and Politics of the Black Panther Party, which won the American Book Award. Aspects of the modern African American freedom struggle and the history of modern social movements unite his current research and writing interests.

Freedom! The Story of the Black Panther Party (Hardcover)