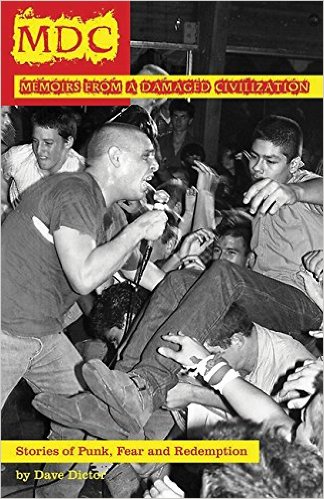 Pegasus Books teams up with 924 Gilman to present Dave Dictor, author of MDC: Memoirs from a Damaged Civilization

Presented as part of "Mosh Lit:" A Pegasus Books and 924 Gilman Event Series

A searing punk memoir by an American original rebelling against conformity, complacency, and conservatism with his iconic band, MDC.

From the time Dave Dictor was young, he knew he was a little different than the all-American kids around him. Radicalized politically while in high school, inspired to seize opportunities by his hard-working parents, and intrigued with gender fluidity, Dictor moved to Austin, and connected with local misfits and anti-establishment rock'n'rollers. He began penning songs that influenced American punk rock for decades. MDC always has been in the vanguard of social struggles, confronting homophobia in punk rock during the early 1980s; invading America's heartland at sweltering Rock Against Reagan shows; protesting the Pope's visit to San Francisco in 1987; in 1993 they were the first touring US punk band to reach a volatile Russia after the collapse of the Soviet Union. Dictor's narrative is a raw portrait of an American underground folk-hero who stood on the barricades advocating social justice and spreading punk's promise to a global audience. Part poet, renegade, satirist, and lover, he is an authentic, homegrown character carrying the progressive punk fight into the twenty-first century.

Dave Dictor is singer, lyricist, and founding member of legendary American punk band MDC (Millions of Dead Cops). Since 1979, Dictor has toured throughout the world with MDC, releasing more than nine albums with MDC that sold more than 125,000 copies. MDC continues to tour, playing over sixty concerts each year. Dictor's MDC song, John Wayne Was a Nazi," was featured in the best-selling video game Grand Theft Auto 5. He appeared in the film American Hardcore and resides in Portland, Oregon.

MDC: Memoir from a Damaged Civilization: Stories of Punk, Fear, and Redemption (Paperback)