Anderson Cooper and co-author Katherine Howe discuss their new book, Vanderbilt: The Rise and Fall of an American Dynasty 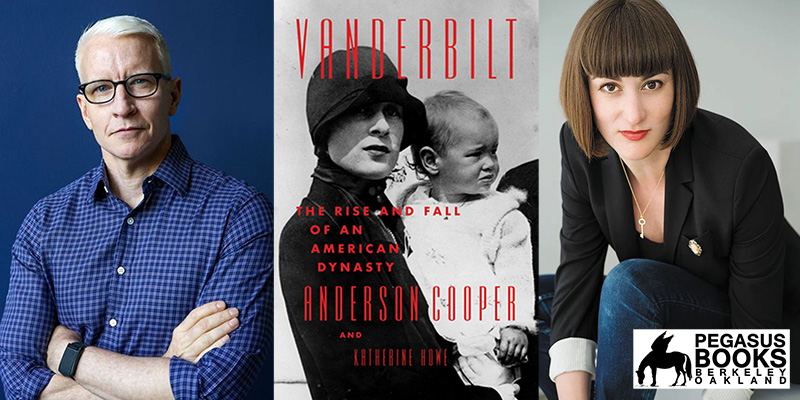 Pegasus Books joins other indie bookstores across the country to welcome Emmy Award–winning CNN anchor, CBS correspondent, and bestselling author ANDERSON COOPER in discussion with co-author Katherine Howe about their new book, Vanderbilt: The Rise and Fall of an American Dynasty. Ticket price includes the book and admission to the virtual event. Book will ship after the event.
PURCHASE TICKETS

ABOUT THE BOOK:
New York Times bestselling author and journalist Anderson Cooper teams with New York Times bestselling historian and novelist Katherine Howe to chronicle the rise and fall of a legendary American dynasty—his mother’s family, the Vanderbilts. Written with a unique insider’s viewpoint, this is a rollicking, quintessentially American history as remarkable as the family it so vividly captures.

ABOUT THE AUTHORS:
Anderson Cooper joined CNN in 2001 and has anchored his own program, Anderson Cooper 360°, since March 2003. Cooper has won 18 Emmys and numerous other major journalism awards. He lives in New York with his son, Wyatt.

Katherine Howe is a novelist and historian of America. She holds a BA in art history and philosophy from Columbia and an MA in American and New England Studies from Boston University, where she also did doctoral work. She is the author of the New York Times bestsellers The Physick Book of Deliverance Dane and The House of Velvet and Glass, as well as the young adult novels Conversion and The Appearance of Annie van Sinderen. She served as editor of The Penguin Book of Witches. She has appeared on NPR, National Geographic, Smithsonian TV, the Travel Channel, and Good Morning America. She lives with her family in New England and New York City.