BoJack Horseman producer / production designer and award-winning cartoonist Lisa Hanawalt presents Coyote Doggirl. The graphic novel is a playful homage to and send-up of classic Westerns, presenting the story of the goofy, dramatic, and fiercely independent Coyote as she journeys through the desert on horseback. With Coyote Doggirl, Hanawalt documents the harsh realities of sexism, her insatiable admiration of horses, and the indispensability of a good crop top.

“Lisa's work is a reminder of the limitless boundaries of one's imagination. She somehow creates fantastical worlds within our own, commenting on some of our most timely issues while exploring our most minute absurdities. I could spend all day inside this heartfelt, beautiful, twisted take on a classic Western.”--Abbi Jacobson, Broad City 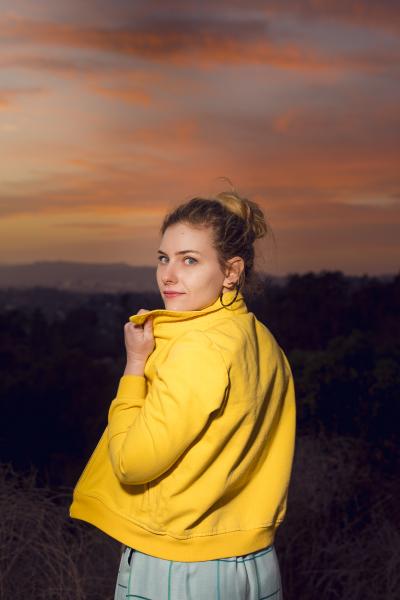 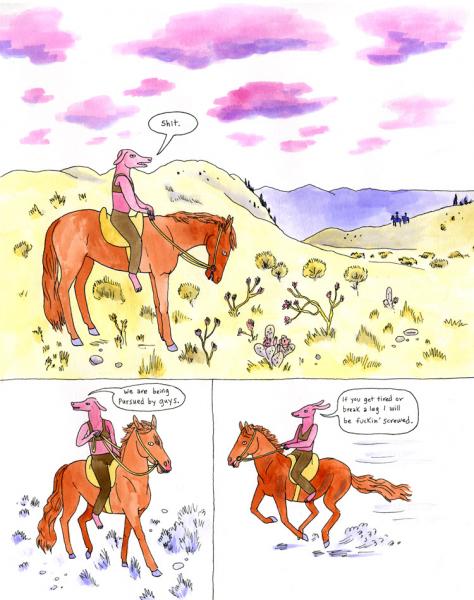 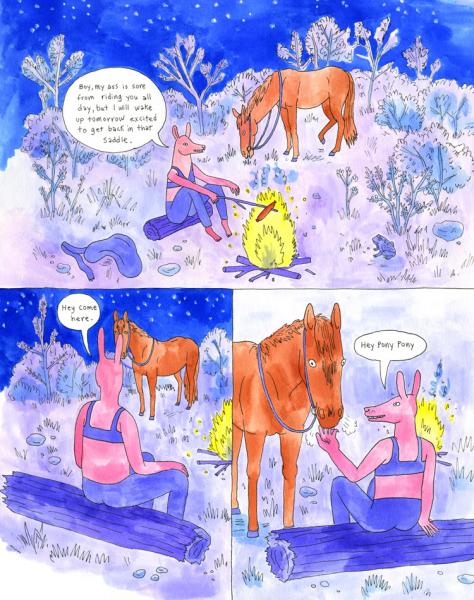 Coyote is a dreamer and a drama queen, brazen and brave, faithful yet fiercely independent. She beats her own drum and sews her own crop tops. A gifted equestrian, she’s half dog, half coyote, and all power. Together with her trusty steed Red, there’s not much that’s too big for her to bite off, chew up, and spit out right into your face, if you deserve it. But when Coyote and Red find themselves on the run from a trio of vengeful bad dogs, get clobbered by arrows, and are tragically separated, our protagonist is left fighting for her life, and longing for her displaced best friend. Taken in by a wolf clan, Coyote may be wounded, but it’s not long before she’s back on the open road to track down Red and tackle the dogs who wronged her.

Lisa Hanawalt’s homage to and lampoon of westerns like Butch Cassidy and the Sundance Kid, Coyote Doggirl is a self-aware, playful subversion of tropes. As our fallible hero attempts to understand the culture of the wolves, we see a journey in understanding and misunderstanding, adopting and co-opting. Uncomfortable at times but nonetheless rewarding and empowering, the story of these flawed, anthropomorphized characters is nothing if not relentlessly hilarious and heartbreakingly human. Told in Hanawalt’s technicolor absurdist style, Coyote Doggirl is not just a send-up of the western genre, but a deeply personal story told by an enormously talented cartoonist.

Lisa Hanawalt is the creator of the upcoming Netflix original series Tuca & Bertie, as well as the producer and production designer of the Netflix original series BoJack Horseman. Her quarterly food column for Lucky Peach won her a James Beard Award for humor. Hanawalt’s first collection with Drawn & Quarterly was the critically acclaimed My Dirty Dumb Eyes. She co-hosts the podcast Baby Geniuses with comedian Emily Heller. Her second book with D+Q, Hot Dog Taste Test, won her the Ignatz Award and appeared on best-of-the-year lists from The Washington Post, The Guardian, NPR, and elsewhere.

"A story of flight and vengeance, sunsets and sagebrush, love and leather underwear. Hanawalt’s blues could be set in the sky and belong there; her pinks are almost alive. These are the cave paintings I want them to find in 10,000 years."
Patricia Lockwood, author of Priestdaddy

"Hanawalt is known for her ability to deliver genuinely hilarious visual gags and Coyote Doggirl is no exception. What’s especially interesting to me, however, is how Coyote's tone refuses to stay put, venturing from slapstick to poignant, and finally into downright bleak territory, appropriate for a Western. Her deftness with color is also worth study. I’m taken by how her characters contrast with the iconic and carefully studied features of the western landscape, from mountain plateaus to bright and delicate wildflowers."
Kelly Sue DeConnick, author of Bitch Planet, Captain Marvel

"Lisa's work is a reminder of the limitless boundaries of one's imagination. She somehow creates fantastical worlds within our own, commenting on some of our most timely issues while exploring our most minute absurdities. I could spend all day inside this heartfelt, beautiful, twisted take on a classic Western." Abbi Jacobson, co-creator of Broad City