Pegasus on Solano welcomes writer Dani Gabriel and illustrator Robert Liu-Trujillo for a reading, Q&A, and book signing of SAM! 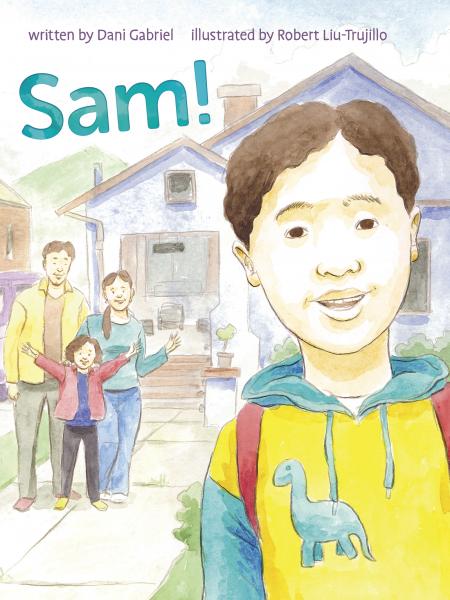 Nobody knew Sam was a boy except for him. Sam loves riding his bike and learning about the American Revolution. He is full of laughter and joy. There’s just one problem: Sam’s family knows him as a girl named Isabel. Sam feels a sense of relief when he finally confides in his annoying but caring sister Maggie, and then his parents, even though it takes them a while to feel comfortable with it. But with lots of love and support, Sam and his family learn and grow through Sam’s journey to embrace his true self. In the vein of I Am Jazz by Jessica Herthel, Sam! is based on a true story. With a note from the author explaining their family’s experience, Sam! is an important addition to a list of books that help children and adults discuss gender identity.

Dani Gabriel is a queer/gender fluid poet and writer, the author of The Woman You Write Poems About (Civil Defense Poetry) and coauthor of Molotov Mouths (Manic D Press). Dani received an MFA from Mills College. They are the Poet Laureate of El Cerrito, CA. Dani lives with their feisty and rambunctious family, which includes an 11-year-old artist named Samson, a fierce 13-year-old feminist named Magdalene, and a partner who is an electrician, an amazing cook, and a phenomenal human. Dani likes gummy candy and works as a grant writer and writing teacher throughout the Bay Area.

Robert Liu-Trujillo is an author/illustrator and publisher from the Bay Area. He has worked on several picture books including Furqan’s First Flat Top, which he wrote and illustrated, One of a Kind, Like Me by Laurin Mayeno, which he illustrated, and Thirteen Ways of Looking at a Black Boy by Tony Medina, for which he contributed an illustration. He is a co-founder of The Trust Your Struggle Collective, a contributor to Rad Dad, and the founder of Come Bien Books. He lives in Oakland, CA, with his wife, son, and daughter.